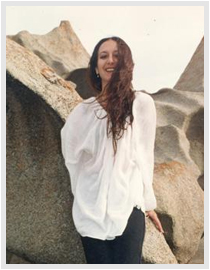 Wendy Ella Wright first travelled to Japan by ocean liner with her family at the age of nine. Her first memory of Japan is seeing the snowcapped Mount Fuji from the ship approaching the port.

At age seventeen she entered Sophia University Department of Comparative Culture, studying the art, literature, history and language of Japan. During this time, she began to read the translations and originals of the ancient poetry of Kyoto. Often she visited the kabuki Minami-za and Kabuki-za as a young girl, and remembers being presented with a branch of the cherry blossoms used for stage decorations while walking outside the theatre next to the Kamo River. While living on the stream of carp running into the sea, next to the "Take-tera" temple where Kawabata Yasunari wrote "Sound of the Mountain", she began to take photographs and to write short stories and ephemera that have evolved into a life of writing.

Meeting the Australian writer Thomas Shapcott, a poet, novelist and librettist who inaugurated the chair of Creative Writing at Adelaide University was a major turning point in her life as a writer and her journey back to her homeland as a translator of Japanese poetry. The title of her Doctorate of Philosophy thesis completed in 2007 is "Intangible Gifts and its accompanying exegesis, Japan, the Love Story and Myself". This title of a novel and a collection of essays and poetry was inspired by Kawabata's speech written for receiving the Nobel Prize, titled, "Japan, the Beautiful and Myself".

Seeing the classic noh theatre being performed outdoors by torchlight and the new avante garde versions of these performed world-wide, she continues to dream of the new and old arts of Japan, now reaching across the seas. Currently she is creating a series of translated poetry and visual images in collaboration with contemporary Japanese poets and artists.

Adapted from the Japan Art Directory in Australia http://jad.jpf-sydney.org

Collections in this community

Translations of poetry by Terayama Shuji: a work in progress
2